Saturday I got into the Tower at about 10.45am. I had felt really ill on Friday and felt like I needed to take it slowly and not rush to get into the Tower.

I took photos of what had been done on Friday before starting anything else so I could log the progress of change with the paintings. 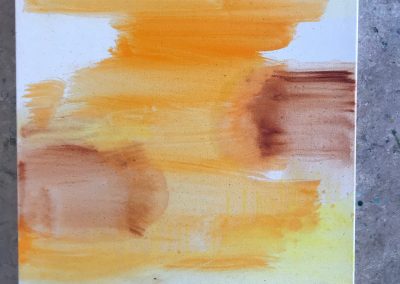 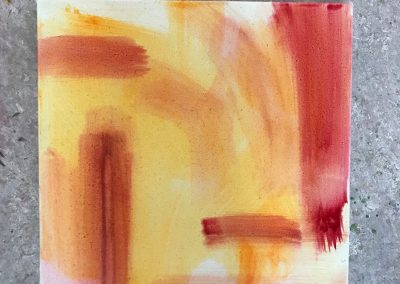 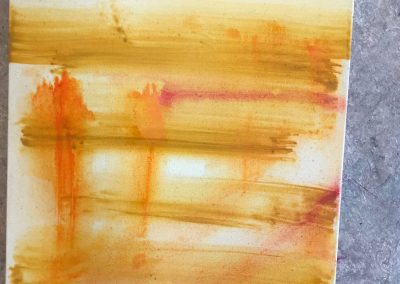 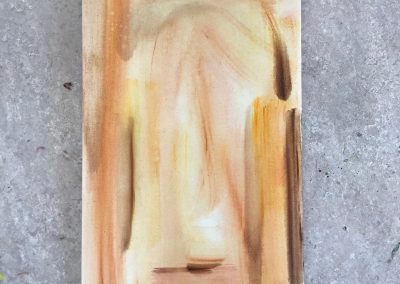 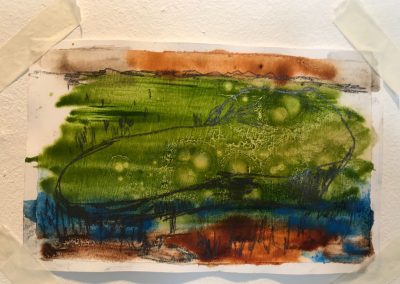 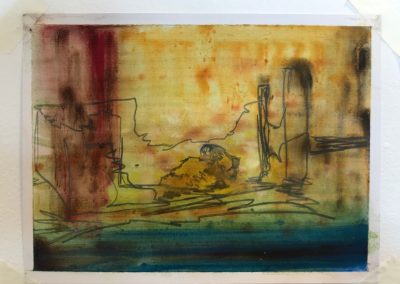 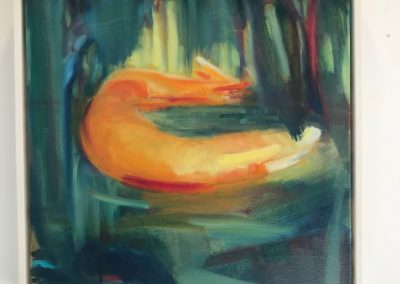 After this I selected 2 canvases I wanted to work on and try to push forward.

I applied the oil medium to one of the canvases and worked on it afterwards, to see how this would work.

I also worked on the water colour sketches on paper. 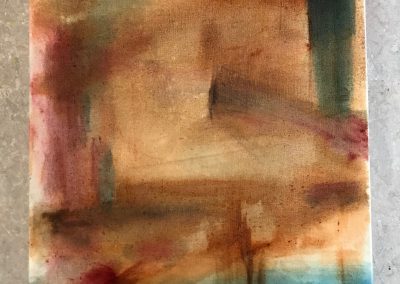 Day 6 oiled and worked over 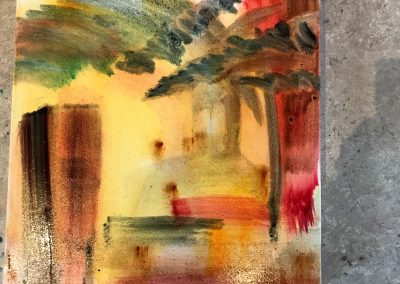 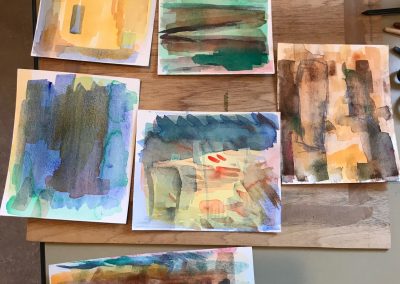 I reread the description in Rhygyvarch’s Life of Saint David of ‘The Saint’s Conception’:

“When the aforesaid thirty years were done, divine power sent Sant, king of the country of Ceredigion, as far as a community of the people of Dyved. And the king met a nun, a virgin called Nonnita, a very beautiful and graceful girl, whom desiring he took by force and violated. And she conceived her son, holy David, who neither before nor after knew a man, but, continuing in chastity of mind and of body, led a most faithful life, for from that time of conception she lived on bread and water only. In the place wherein she conceived on being forced, there lies a small level space, pleasing to the sight, and well supplied with moisture from above. On this level space at the time of her conception two great stones appeared, one for the head and the other for the feet, which had not formerly been seen. For the earth, rejoicing at her conception, opened its breast that it might both preserve the modesty of the girl and foretell the importance of her offspring.”

Focusing just on this piece of text, and having already read excerpts from Jane Cartwright’s ‘The Cult of St Non: Rape, Sanctity and Motherhood in Welsh and Breton Hagiography’ I find as a woman of my time, this whole the earth opening its breast to allow for the rape of this poor unsuspecting Nun makes me kind of angry. It appears that it’s ok she was forced into having sex with the king of cerdigion and violated because she conceived St David.  And then only eat bread and water, and that she never knew a man again after this rape. As Jane Cartwright so eloquently writes it, “However, at no point during their torturous ordeals is their virginity violated, since virginity is almost a prerequisite for feminine sanctity, and the image of the female saint as the bride of Christ, a veiled consecrated nun, is inextricably linked with her female purity.’

So it’s ok for a man to take a woman because he felt attracted to her, despite the fact he’s violating her, because this was the path to the birth of a great Saint. Never mind her feelings on this issue.

Let us not forget  Monica Sjoo and Barbara Mor’s seminal book ‘The Great Cosmic Mother’, which discusses the original meaning of the word virgin, ‘Ancient moon priestesses were called virgins. “Virgin” meant not married, not belonging to a man – a woman who was “one-in-herself.” The very word derives from a Latin root meaning strength, force, skill; and was later applied to men: virile, Ishtar, Diana, Astarte, Isis were all called virgin, which did not refer to sexual chastity, but sexual independence. And all great culture heroes of the past, mythic or historic, were said to be born of virgin mothers: Marduk, Gilgamesh, Buddha, Osiris, Dionysus, Genghis Khan, Jesus –they were all affirmed as sons of the Great Mother, of the Original One, their worldly power deriving from her. When the Hebrews used the word, and in the original Aramaic, it meant “maiden” or “young woman,” with no connotations of sexual chastity. But later Christian translators could not conceive of the “Virgin Mary” as a woman of independent sexuality, needless to say; they distorted the meaning into sexually pure, chaste, never touched.’ (pgs 158 – 159)

As part of my process, I like to also make quite obvious narrative paintings or drawings to help my ideas flow into something more subtle and symbolic, so after sketching various rape scenarios I felt like one of the paintings, where I had started to focus in on the stones which arose from the ground, required me to make an illustrative image of the rape of St Non.

Interestingly, in her book The Cult of St Non ( etc) Jane Cartwright quotes two academics on the subject of the rape of female saints, “In an extensive study, Corinne Saunders confirms that in medieval English hagiography, ‘in no instance is the virgin actually raped’. And Kathleen Coyne Kelly states categorically that there are no rape narratives in hagiography:

Virginity always outlasts the virgin…..I have never read a narrative which describes rape, or says that rape was committed, or even creates a ‘before and after’ scenario…It is possible to argue that rape is ‘represented’ in hagiography through a rhetoric of silence, if not displacement and substitution, but the fact remains that there are no direct narratives of rape in hagiography. (Kelly Performing Virginity, 42-3)

So I think for me, alongside trying to tentatively stain canvases and allow my research to infiltrate my painting, I rather self consciously also had to paint some image of the rape.

This painting is unfinished and rather crass in its current stage, but I am bravely going to share an image of it anyway 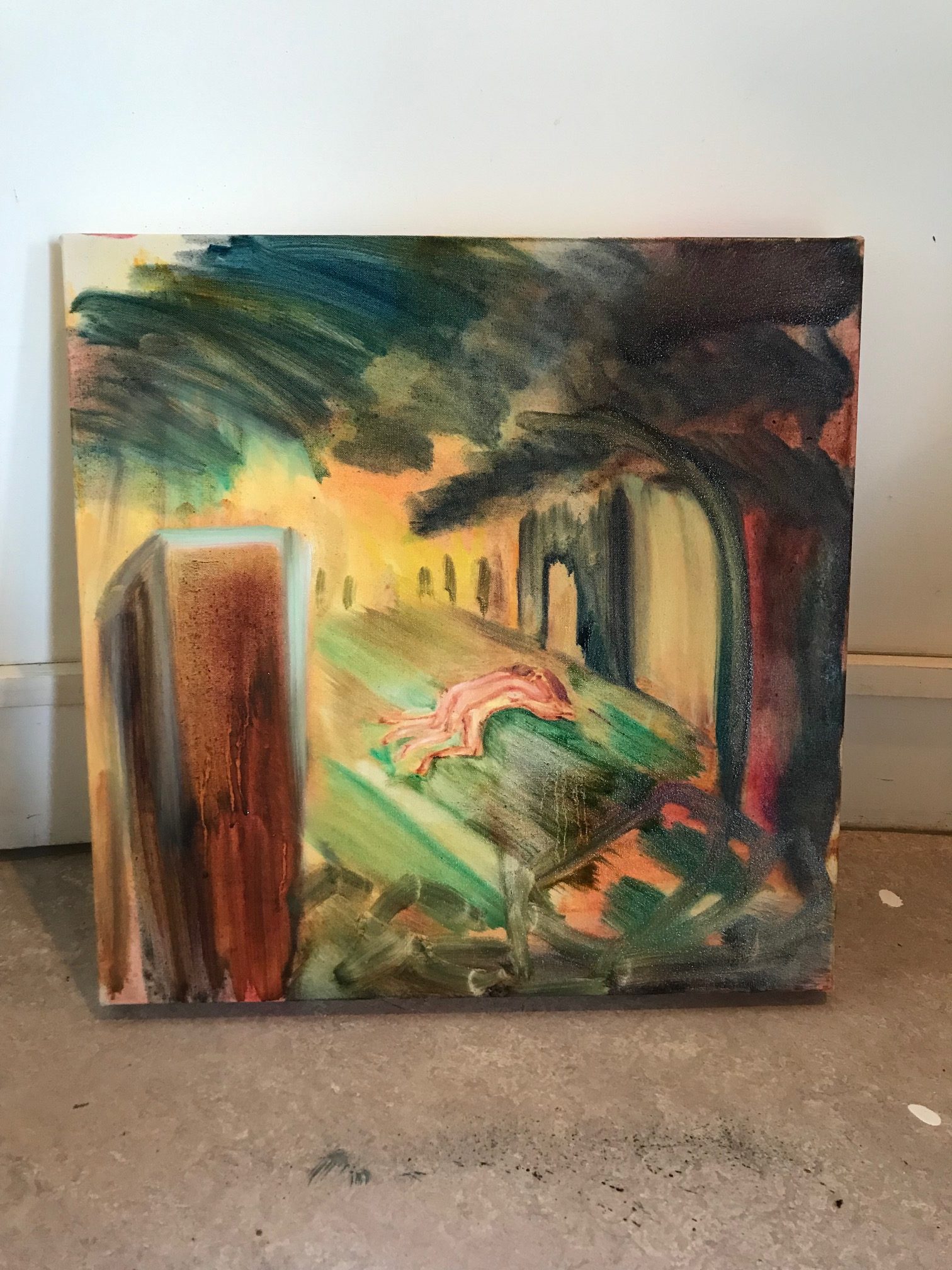 Having attempted this artistic impression of the ‘Rape of St Non’, or ‘Two Great stones appeared’ or even ‘The earth rejoiced at her conception’, I was then struck by the fact that people come into the tower, with children and might not want them to see a poorly painted image of rape, so I hid the painting behind a board to dry off for a bit.

I will continue with it, and most probably change it drastically as I do not like its current form, but this was something that I needed to do, to get the ‘obvious’ imagery out.

I also felt like I was losing my focus and going from one style of painting to another, so I finally put some cobalt blue stains on the paintings which had been crying out for me to do so for some time. 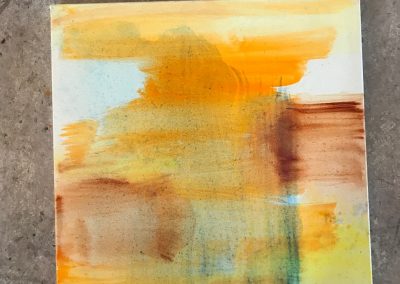 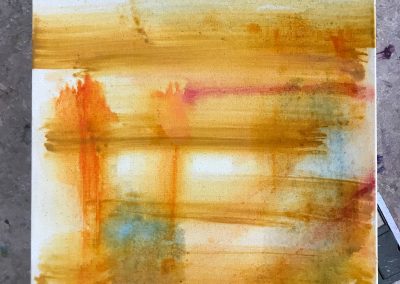 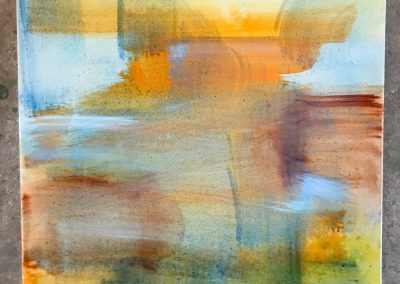 It’s as if my realisation that there is only two weeks left to work in the Tower, and not even every day as I still have to balance my work and family life around it, has brought with it some kind of need to panic paint, or panic achieve something. It’s an uncomfortable place to be, with myself, and my doubts about my skill as a painter, indeed as anything, are tumbling around my psyche.